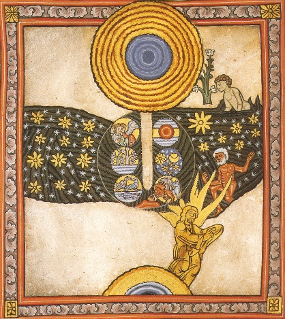 Although shamanism is typically associated with pre-industrialized cultures, it has in fact been a facet of Christian spirituality as well. In medieval Europe, for example, Mystics were holy people who claimed to interact directly with Jesus, Mary, saints and angels. One such person was St Hildegard von Bingen, a 12th-century German nun who left behind a mind-boggling array of writings on such topics as medicine, music, and cosmology. In this illustrated talk, we’ll take a close look at medieval manuscript paintings that reproduce her out-of-body experiences in the otherworldly realm.

Join us for our “Art History Illustrated” talk series, held the third* Thursday of every month at 6:30 p.m. This monthly illustrated talk series is presented by art historian Brenda Edgar, in collaboration with the Carnegie Center for Art and History.

*This month’s talk will be held on the second Thursday.