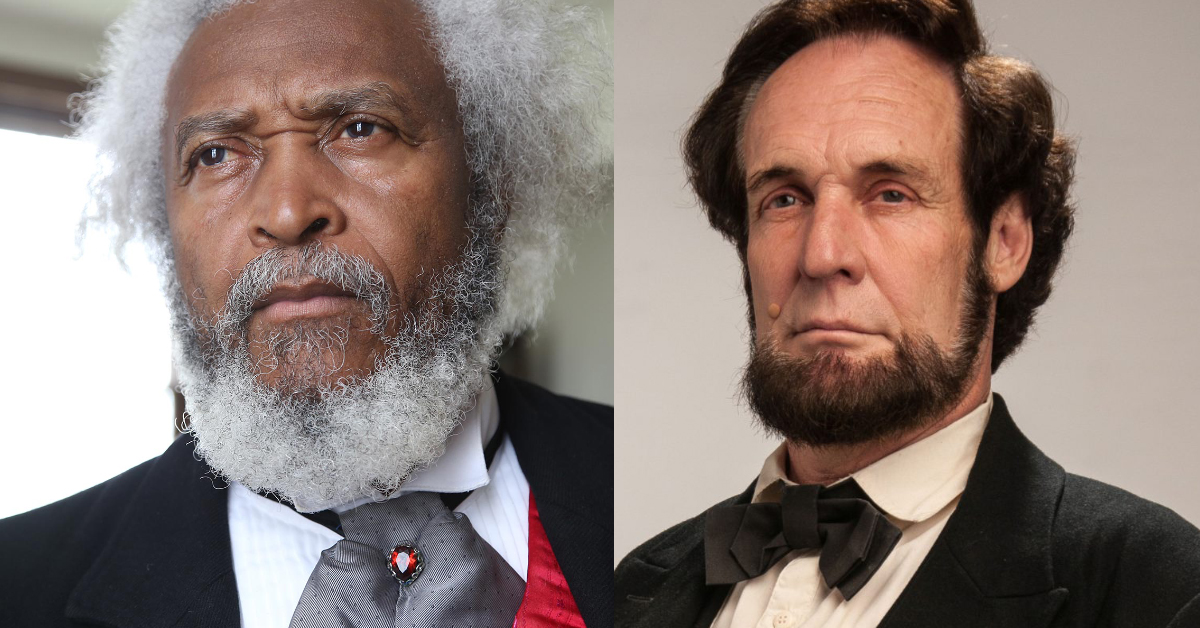 **The event is sold out. Unclaimed seats will be released to walk-ins and waitlist 5 minutes prior to event.**

Fr­ederick Douglass and Abraham Lincoln are coming to New Albany, Indiana, May 8-10, 2019! Well-known living historians Michael E. Crutcher (Douglass) and Dennis Boggs (Lincoln) portray these pivotal historical figures in the second program of Songs & Stories of Freedom, a year-long series presenting African American history through the power of the arts. Crutcher and Boggs will present two public performances at 6:00 PM on May 9 and 10 at the Carnegie Center for Art and History, as well as several school programs for eighth graders in New Albany Floyd County Schools. The public programs are free, but registration is required at carnegiecenter.org

Michael Crutcher and Dennis Boggs are considered to be among the best Living Historians in the nation. In contrast to “re-enactors” that rely heavily on costuming, “Living Historians” employ a high degree of knowledge and understanding about the life and times of the intended person being portrayed to embody the character. Crutcher as Douglass and Boggs as Lincoln bring history to life. Both are familiar with the details of their subject, including the considerable writings that Lincoln and Douglass produced during their remarkable lives. Did you know that Abraham Lincoln carried a 5 dollar Confederate bill in his wallet when he was assassinated? Boggs knows, and he carries a replica in his wallet when he performs.

Michael E. Crutcher of Nicholasville, KY, began by re-enacting the life of a Civil War soldier in the 12thUnited States Heavy Artillery Regiment stationed at Camp Nelson in Kentucky. Crutcher’s great-grandfather was also at Camp Nelson during the war, attached to the 13thUS Colored Heavy Artillery. One day, Crutcher’s family noticed the strong resemblance he has to a photograph of the famed abolitionist, orator, suffragist, and writer Frederick Douglass. Intrigued by the coincidence, Crutcher found other ways that he was similar to Douglass…both, for example, were raised by their grandmothers, and his interest deepened. Crutcher has traveled across the nation as a Living Historian, portraying Douglass and bringing the truth of his life to diverse audiences. In 2018, Crutcher posed for the life-size bronze sculpture of Frederick Douglass that stands outside the New-York Historical Society.

Dennis Boggs, from Nashville, TN, has been traveling the nation portraying Abraham Lincoln, the 16thPresident of the United States, for almost twenty years. On average, Boggs does about 250 performances a year. The former retail grocer with a penchant for community theatre once took on the role of Lincoln for a local play and found a new calling he could not deny in the process. Boggs’ resemblance to and knowledge of Abraham Lincoln won him first place in the National Abraham Lincoln Look-Alike & Oratorical Competition that was held during Decatur Celebration in Decatur, Illinois.

Crutcher and Boggs know each other well and have performed together before. Both cite talking with students to be among the most rewarding aspects of being Living Historians. Each is able to take questions from the children and provide some perspective based upon what either Lincoln or Douglass may have thought about a subject. In an ongoing partnership with the school district, the Carnegie Center will bring Boggs and Crutcher for performances at all three New Albany Floyd County middle schools.

Songs & Stories of Freedom is a year-long series of programs interpreting the Underground Railroad and African American history through the power of the arts, including opera, acting, illustration and literature. Stay tuned for more events in 2019. Songs & Stories of Freedom is made possible in part by a grant from Horseshoe Foundation of Floyd County. The Carnegie Center’s Youth Education Program is supported by The Gheens Foundation, Rotary Club of New Albany, Senior Source Insurance, and proceeds from the 2018 Taste for Art and History Gala.